In The Economist of 1970s Norman Macrae launched Entrepreneurial Revolution - a hunt for leaders who designed systems that saved humans from overgovernment or big corporate4s only designed to serve the richest
By father's death in 2010, Sir Fazle Abed was clearly the leader of the ER Hall of Fame
2022 happy 77 to UN- chris.macrae@yahoo.co.uk writes- my purpose is not to argue over 90%- I just feel that you might have hoped every country in Africa was doing much better for and by all of its peoples - here are some clues from my father's 1984 review- you can also download the whole of the book dad and I wrote in 1984 2025report.com - the first 5 chapters on how to help the peoples of Russian from the late 1980s break my heart today and pretty much every year of our book's update on whether there will be a sustainability generation
EXPONENTIAL CHANGE BEYONG THE EXPERIENCE OF HUMAN RACE
Dad knew quite a lot about Budapest - in 1951 he met Von Neumann at Princeton and adopted Von Neumann's journalistic scoop - ask leaders what they will do with 100 times more tech every decade - that's a billion times more potential impact on 30 year generation- dad went on to be Von Neumann's biographer; in 2022 with von Neumann's family we hope to pilot version 0 of top 20 AI Hall of Fame - which tech wizards are most connecting under 30s with SDGs and www.teachforsdgs.com www.teachforun.com
here is a book review/ article from my father in 1984 NY Times - AID Down The Drain 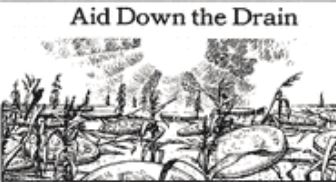 https://www.nytimes.com/1984/02/26/books/aid-down-the-drain.html
REVIEW: Norman Macrae, New York Times 26 Feb 1984
REALITY & RHETORIC _ Studies in the Economics of Development. By P. T. Bauer. 184 pp. Cambridge, Mass.: Harvard University Press. $15.
IN Hungary in the 1920's, when Thomas Balogh and Nicholas Kaldor were learning socialist economics at the high school attached to Budapest University, the slightly younger Peter Bauer, born in 1915, was imbibing Adam Smithism in the Skola Pia down the road. All three Budapest youths grew up to become professors of economics at Britain's senior universities, and all are now members of the House of Lords.
Lord Balogh and Lord Kaldor were principal tax and microeconomic advisers to Harold Wilson's first Labor Administration in 1964-70; the City of London wailed it was being ravaged by Magyar hordes. Lord Bauer was the first professor of economics to be ennobled by Prime Minister Margaret Thatcher, who does not usually like professors of economics. ''Reality and Rhetoric'' is another (rather untidily updated) collection of his essays explaining how overgovernment stops poor countries from growing richer and why the only successful developers are the laissez-faire Singapores.
Most of his views are very unpopular with professional diplomats. He will not toady to third world governments, because his sympathy lies with their peoples, subjected to what he calls their despotism and kleptocracy. He regrets that international aid is maintaining African, Asian and Central American governments whose economic policies reduce their peoples' living standards by far more than international aid could ever raise them.
Thus, he says, the significant figures for Tanzania, the African country that has received the most aid, are not that its foreign aid in 1980 equaled 18.1 percent of its misreported national income but that it equaled 106.8 percent of its internal tax receipts and 152.8 percent of its export earnings. The money trickling to the people was insignificant compared with the extra tax revenues and foreign exchange put at the direct disposal of the authoritarian Tanzanian Government. During the 1970's, he says, that Government used its aid to collectivize agriculture and suppress private trading activity, with devastating effects on food and other production and distribution, helping to spread famine and uproot people from their homes. Yet President Julius Nyerere is one of the more saintly third world leaders, because he does not use his aid money to finance the heroin trade and does not give to his relations the lucrative import licenses his absurd internal economic policies require.
A similar cleanish record, except on political nepotism, is generally accorded the more democratic rulers of India, which is Asia's largest aid receiver. (In 1980, its aid equaled 1.6 percent of recorded gross national product, 16.8 percent of tax revenues and 31.2 percent of export receipts.) Yet during the 1970's, Lord Bauer points out, India used its aid to wage a war against Pakistan (another large aid recipient), build a nuclear bomb, forcibly sterilize many poor people and pursue extremely wasteful policies of import substitution and other economic controls. It also severely restricted inflows of capital, the shortage of which is the only economically logical ground for aid.
Lord Bauer does not overblame the politicians, who were serving their own self-interest in the normal way, but reserves his fury for professors of economics who have not looked at the now ample statistics of collectivism's perverse effects. His own studies show that ''commodity stabilization schemes'' do not stabilize prices but widen fluctuations in output (and probably in producers' total incomes). He also concludes that marketing boards and state cooperatives reduce the incomes of poor farmers and that computerized state planning in poor countries always has ludicrous results. Kleptocracies are the worst places in which to replace market signals by political decisions that provide more power, influence, jobs and money for civil servants, politicians and their wives. He says the culture of most of Asia and Africa has always been more authoritarian than the West's - thus less conducive to self-reliance, sustained curiosity and experiment - so it is wicked for Western economists to help extend the period of overgovernment that reinforces this disadvantage.
Free marketers who are more optimistic about third world development, including myself, believe that institutional aid should be continued through the International Monetary Fund and other lending agencies but be geared to the requirement that recipients end economic nonsenses. There is obviously no kindness in pumping more government-to- government aid money into countries whose main problems are inflation (stemming from excessive money supply), autocracy and overgovernment. But there does seem a case for not allowing balance-of-payments restraints to dictate excess restrictions in poor countries where a new entrepreneurism is struggling to breathe free. Lord Bauer opposes this view because he thinks that entrepreneurs who use cheap labor and whose activities appear to be profitable will generally get all of the rather little capital they need anyway.
Those who dispute this part of Lord Bauer's generally convincing judgment should read this book, but they may be deterred because the distinguished economist gets cross in such detail with discredited leftist academics of the 1950's and '60s. The eagle should not hunt flies.
chris macrae at 6:47 AM No comments:
‹
›
Home
View web version